Peyton Farquhar was a well-to-do planter, of an old and highly respected Alabama family. Being a slave owner and like other slave owners a politician he was naturally an original secessionist and ardently devoted to the Southern cause. Circumstances of an imperious nature, which it is unnecessary to relate here, had prevented him from taking service with the gallant army that had fought the disastrous campaigns ending with the fall of Corinth, and he chafed under the inglorious restraint, longing for the release of his energies, the larger life of the soldier, the opportunity for distinction. That opportunity, he felt, would come, as it comes to all in war time. Meanwhile he did what he could. No service was too humble for him to perform in aid of the South, no adventure too perilous for him to undertake if consistent with the character of a civilian who was at heart a soldier, and who in good faith and without too much qualification assented to at least a part of the frankly villainous dictum that all is fair in love and war. 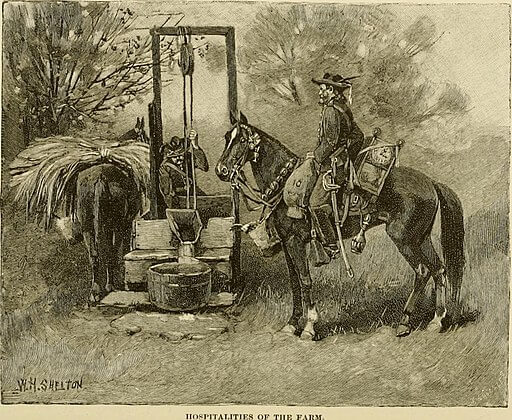 One evening while Farquhar and his wife were sitting on a rustic bench near the entrance to his grounds, a gray-clad soldier rode up to the gate and asked for a drink of water. Mrs. Farquhar was only too happy to serve him with her own white hands. While she was fetching the water her husband approached the dusty horseman and inquired eagerly for news from the front.

“The Yanks are repairing the railroads,” said the man, “and are getting ready for another advance. They have reached the Owl Creek bridge, put it in order and built a stockade on the north bank. The commandant has issued an order, which is posted everywhere, declaring that any civilian caught interfering with the railroad, its bridges, tunnels or trains will be summarily hanged. I saw the order.”

“How far is it to the Owl Creek bridge?” Farquhar asked.

“Is there no force on this side the creek?”

“Only a picket post half a mile out, on the railroad, and a single sentinel at this end of the bridge.”

“Suppose a man–a civilian and student of hanging–should elude the picket post and perhaps get the better of the sentinel,” said Farquhar, smiling, “what could he accomplish?”

The soldier reflected. “I was there a month ago,” he replied. “I observed that the flood of last winter had lodged a great quantity of driftwood against the wooden pier at this end of the bridge. It is now dry and would burn like tow.”

The lady had now brought the water, which the soldier drank. He thanked her ceremoniously, bowed to her husband and rode away. An hour later, after nightfall, he repassed the plantation, going northward in the direction from which he had come. He was a Federal scout.

This site uses Akismet to reduce spam. Learn how your comment data is processed.